This is a bad idea.

This is seriously a bad idea.

Brian Brushwood told me this was a good thing to try so blame him. Now that I have that out of the way, I can explain exactly what the hell we did.

So we thought it was a good idea to mix an ungodly amount of thermite, set it on a rock, set fire to it while I was standing next to it, and use the molten iron to cook a steak on top of. Aside from almost setting on fire a few times and possibly getting food poisoning, it actually worked which is not surprising considering it worked on YouTube. 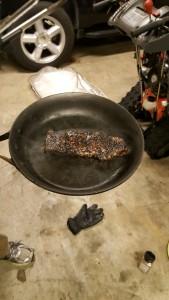 I’m sorry for the vertical picture.

It wouldn’t be much of a scientific comparison if we didn’t cook a steak normally to taste test against so we broke out the propane forge and cooked over that as well, in the end they both were fairly close with the winner going to the thermite for cool factor.