This latest addition to my growing collection of Project Diva: Future Tone controllers is a 1:4 scale version of the full arcade layout. At its heart is a Brook PS3/PS4 fighting board and four Seimitsu PS-14-DN 24mm buttons. Housed inside of a laser cut ABS case provides durability and style. In addition, this iteration features a brand new input method by means a capacitive touch sensor.

The touch pad is manufactured by Brook and has approximately the same dimensions as the Dual Shock 4 touch pad. The USB cable is detachable with a micro-XLR 4 pin connector and tech-flex covering for protection. While this is a finished prototype, the rough ABS edges are still far from perfect and will likely use white acrylic in the final version.

As for now, the controller is not for sale and the design will receive a few more iterations to increase internal space, strength, and ease of assembly. After these updates, the files will likely be uploaded to Instructables along with full assembly instructions. If I do manufacture finished controllers if anyone actually wants one of these tiny (but still fully usable) controllers, estimated price will be around $199 USD.

The mini project diva controller I have been working on is finally in a working state. It still needs a few things before it will be a finished project.

One of the issues with a controller so small is the acrylic does not have the strength to withstand cracking, namely the corner brackets. To combat this, I will be making the final ver. out of ABS sheet instead. This does limit colors to black, grey, and white but the durability is not there otherwise. In the future it may be possible to use ABS brackets and acrylic panels if anyone is looking for different colors.

If anyone is interested, kits will be available upon request after the final version is posted.

So this year (2018) I am planning on going to MAGFest for the arcade and console games. I want to bring my full size Diva controller but it is just too damn big.

I present a work in progress…

It is a 1/5 scale replica of my full size layout. It will be using Seimitsu PS-15 buttons, a Brook PS3/4 board, some tiny 6mm buttons I had laying around, a TinyXLR 4 pin for the USB out, and probably some LED case lighting because why not? The best part is that it will have a touch slider in the middle instead of some janky button setup.

Total cost will be around $100 in parts so it is much more affordable than the full scale however I don’t know how playable it will be. Stay tuned for updates and hopefully completion.

So I decided that my Dell Dimension 3000 case was too lame so I made a CAD model a mock up of a wooden case. Relatively simple yet still able to do its job with plenty of space for cooling.

As of now it is just the CAD model and a few individual components that have been test made. Next step is to get some wood and start making some of these pieces. It should be a relatively quick project.

UPDATE: Better Pictures Have Been Added, also the template link is HERE
Well, I has been 2 weeks and I already tried to kill it with a 40 watt CO2 laser but it still lives on!

It turned out pretty awesome in the end but of course I can’t leave you with just this because I know someone is going to want to cut up their Switch as well. If you saw the previous post then you probably saw the old template so I present the New and Improved version.

All of the image work was done in Corel Draw (Il add the template for engraving your own later tonight) as multiple layers. I took the CAD DWG file and just directly imported it to Corel and used that as a boundary line for the image and added 6mm wide bars to the top and bottom so no Lasering would be on the curved edge.

After having a working boundary area, I just tried a whole bunch of different squid layouts until I found one that looked pretty good, I wanted it to look like a texture from a little distance.

Before cutting I completely covered the screen with blue tape and the silk screening on the back just in case. (no issues with it cutting the wrong parts)

To make sure it was alligned, I ran the file through with just the vector cut file as shown above and then ligned the Switch up exactly with the cutout. It is designed to slide perfect into the corner guides but just in case the laser was a bit off from someone else’s percussive maintenance. 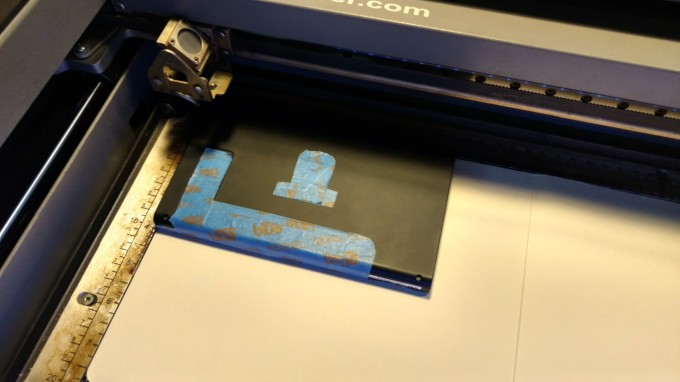 This is the important part!!!

Laser cutters have two (2) modes, raster and vector. Raster engraves images while vector used the laser as a knife and slices stuff apart. My file has hairlines which will be interpreted as vectors so….

Make absolutely sure the laser is set to raster only. RASTER ONLY!!!!!

OK so now that you know to only use RASTER when your Switch is in the death box, the settings I used for raster on an Epilog 40w laser were 1200DPI, 50% speed, 12% power. You can use a little more or less but too much power and the imaging  may look melty.

Here is the Template link MYAHHHHH